Music Lessons for Hartlepool and the North East 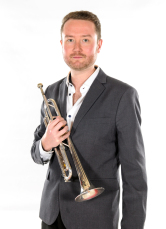 From an early age, inspiration to become a professional musician thrived within Tobias as a result of being exposed to the music industry in the North East of England and mixing with the more experienced performers in the area. Interests in the art of Jazz, Pop and Classical music left him hungry to prove himself and to excel in his musical knowledge. At the age of 11, trumpet became his first instrument and when he was 12 he successfully auditioned into the National Youth Choir of Great Britain.

Between the ages of 12 to 18, he was able to perform with one of the leading choirs in the world, the National Youth Choir of Great Britain. In his time with the choir he has performed all around the UK including venues such as Bridgewater Hall, Coventry Cathedral and Birmingham Symphony Hall. In 2009, Tobias was part of the USA West Coast Tour with Eric Whitacre, performing at San Francisco Cathedral and the Walt Disney Concert Hall (the home of the Los Angeles Philharmonic). During the tour the choir also performed with the award winning Mormon Tabernacle Choir at the LDS Church Conference Centre, which was broadcasted to millions on American TV. The last time Tobias sang in the choir was at the 2012 BBC Proms with Daniel Barenboim and the Western Divan Orchestra performing Beethoven’s Symphony No. 9 in D minor, 'Choral finale’.

Throughout his time with English Martyrs School and Sixth Form College, he focused on this trumpet playing, being an active member of many bands in the area; the Schools big band and Orchestra, The Tees Valley Youth Big Band (County Band), Ska Boom UK, Storm Functions Band, Musicians Unlimited Big Band, The Funk Regulators, White Negros, Voice of the North Big Band (dep), Customs House Big Band, and many more. After studying music and music technology at A-level, Tobias decided to go to University.

Studying at Huddersfield University meant Tobias could have more opportunities to perform many styles of music. He was a member of the University Symphonic Wind Orchestra under the conduction of Phillip McCann and the University Big Band under the conduction of Sean Miller. Tobias organised the University Big band to perform at the North Sea Round Town festival in Rotterdam and Sunderland Big Band Competition. Outside of University, Tobias was a member of various bands and ensembles including Hade Edge Brass Band where he played Flugelhorn in the Championship Section against the likes of Black Dyke and Grimethorpe. Now Tobias is a graduate with a Bmus (Hons).

Currently Tobias is travelling the world as a professional trumpeter since 2012 and promoted in 2015 to Musical Director with Royal Caribbean Cruise Lines working on some of the biggest cruise ships in the world. As Musical Director, he is in charge of all the live music on the ship that includes a 9 piece orchestra (which he performs with also), a 4 piece variety band, Caribbean band, Intermissionists and various entertainers (Piano bar entertainers, Pub Guitar Entertainers, Guest Entertainers etc.). He has been able to work with performers from all over the world such as the Platters, Dave Coz, various Las Vegas entertainers, finalists of Britain & America’s Got Talent and finalists of X Factor (UK & USA). With this job, Tobias has been able to travel around the world being exposed to different cultures whilst gaining strong management skills along the way.

Between contracts, Tobias works as a freelance musician specialising in recording and preforming live with various function bands. With almost 14 years of experience as a professional musician and still being young in an ever-growing industry, Tobias' career is only just starting with more opportunities to conquer.

If you have any queries or wish to book a music lesson, please contact us:

Get social with us